Between savory meals, decadent desserts, and even plenty of crafts, there’s a whole lot you can do with a slow cooker. And thanks to the enterprising folks who dared to dream, we can now add bread making to the list.

It’s really easy to make incredibly fresh, artisanal breads in the crock pot. It also doesn’t hurt that homemade bread is a fraction of the cost you would spend at the bakery. In many slow cooker bread recipes, you don’t need to wait for the dough to rise (it rises and cooks in one go in the cooker), cutting down prep time significantly. And while baking tends to be a winter activity, you can bake fresh loaves of bread in the dead of summer without turning on your oven, and subsequently heating up your entire house.

Pretty much any oven-baked bread recipe can be converted into a slow cooker recipe, provided you follow these tips:

Get the recipe from MOMables.

Once the dough is mixed and kneaded, shape into balls and place in the slow cooker. Though they will fuse together somewhat, simply divvy them back up by pulling them apart.

Get the recipe from Growing Up Gabel. 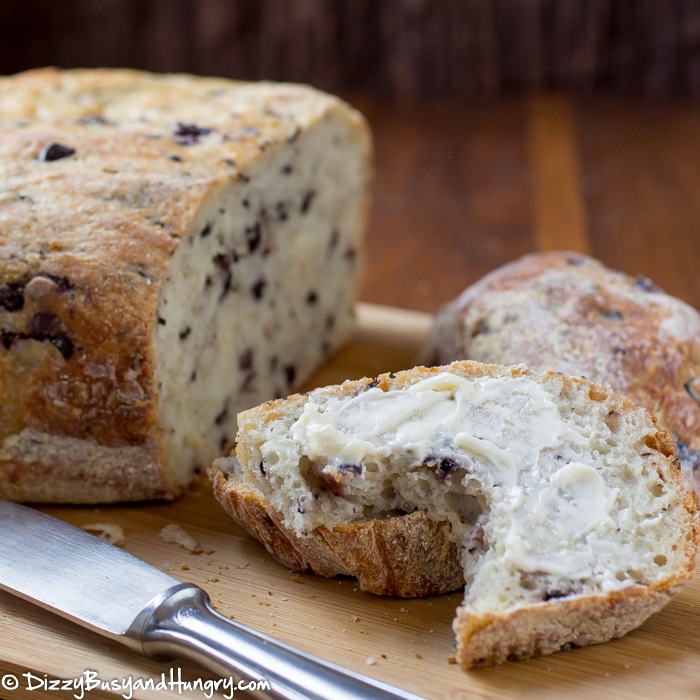 A no knead recipe, this fancy-sounding loaf is actually really easy to make. To skip kneading, you’ll need some quick rise instant yeast and about 2 hours in total of resting time before plunking it in the slow cooker.

Get the recipe at Dizzy Busy and Hungry.

The trick to making this pumpkin bread super moist is to pour the batter into a loaf pan, place the pan into the slow cooker, and then add two cups of water to the pot. Cover with paper towels and the lid to help wick up moisture and prevent the pumpkin bread from becoming mushy.

Get the recipe at Wanna Bite.

A delicious way to use up those too-brown bananas, this recipe requires only 30 minutes of prep time and 4 hours of cooking time on low (or alternatively, 2 hours on high) for a dense and moist treat.

Get the recipe at Crock Pot Ladies.

Another sweet dessert bread, this apple fritter is made with flax seed, diced apples, chopped walnuts, and cinnamon.

Get the recipe from The Gourmet RD. Super easy to prep, this sweet corn bread doesn’t require kneading or any time to rest. Just mix together dry and wet ingredients separately, then combine, and pour into the slow cooker.

Get the recipe from Melissa’s Southern Style Kitchen.

Costing a mere $0.61 per loaf to make, sourdough bread in the slow cooker is not only yummy but also quite cost-effective. The entire recipe requires only three ingredients (flour, salt, and water), but first you’ll need to make sourdough starter a few days ahead of the slow cook.

Get the recipe from Practical Stewardship.

High in fiber and low in fat, this pumpernickel rye bread is prepped and ready for the slow cooker in just 15 minutes.

Get the recipe at Just a Pinch. Flavored with rosemary and thyme (and whichever other herbs you wish to add), focaccia is a soft and chewy flatbread that doesn’t need kneading.

Get the recipe at She Knows.

Whip up a 1 ½ pound batch of brioche dough (or challah) and roll it out flat into a rectangular shape. Generously spread nutella all over the surface, roll it into a tube, and slice lengthwise to expose the inner hazelnut cocoa spread. Twist and coil the “log” into itself so it fits nicely in the slow cooker, and bake for around an hour.

Get the recipe from Artisan Bread in Five.

Fresh and zingy and perfect for summer, this lemon poppy seed bread tilts closer to a pound cake than bread proper. Make it extra sweet with this lemony glaze icing add on.

Get the recipe at Moms with Crockpots. An ooey-gooey treat, these cinnamon rolls are made by rolling out the dough and generously spreading with butter, sugar, and cinnamon. Roll it up and slice into individual swirls. Pop them in the slow cooker for about two hours and drizzle with your choice of maple, vanilla, or coffee icing.

Get the recipe at Sally’s Baking Addiction.