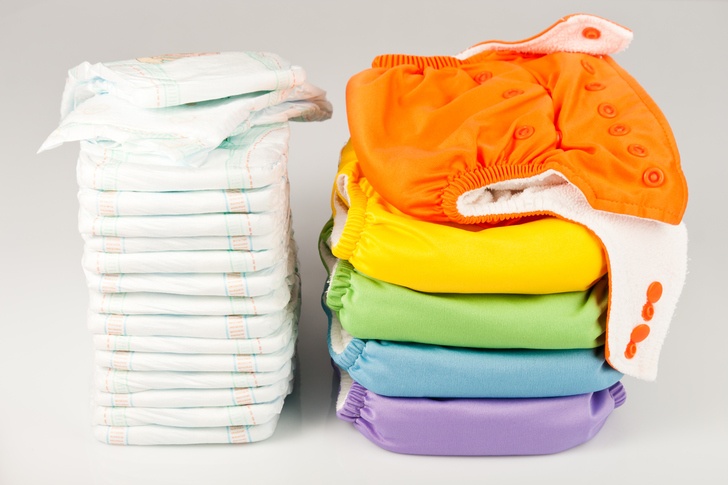 As the great debate over cloth versus disposable diapers rages on, new parents may be wondering which option presents the best choice for their child’s health, the environment, and their budget.

The disposable diaper is a relatively new invention. Prior to the 20th century, babies were clad in cotton or terrycloth materials cut into geometric shapes and fastened with a safety pin. The first disposable, called “Destroyable Babies Napkins”, was introduced in the 1930s but it wasn’t until Proctor & Gamble launched Pampers in 1961 that commonplace use of disposable diapers really took hold.

As is so often the case with products that offer convenience and ease, the pound of flesh is exacted elsewhere. Here are some compelling reasons why you should reconsider using disposable diapers on your baby:

Even though baby food, toys, clothing, and care items all require full disclosure of materials and ingredients, disposable diapers are the exception.

Despite the fact that babies will wear diapers – pretty much constantly – for around two years, and that this material will be touching their genitals for that long stretch of time, neither the FDA nor the FTC considers baby diapers to be medical devices, an article of clothing, or a cosmetic.

As it stands today, there is no oversight or medical testing required to ascertain whether diaper materials are safe. And there is no legal obligation to provide a full and complete listing of ingredients and fragrances used.

Despite the lack of full disclosure on the part of the manufacturer, independent testing of disposables has revealed a dubious mix of materials and ingredients:

The outer lining is frequently made from polyethylene film, which is essentially plastic wrap. It is derived from petroleum or natural gas.

The inner lining is composed of polypropylene, a thermoplastic polymer that absorbs water. It is synthesized from propylene gas.

The absorbent center consists of bleached wood pulp, produced by combining softwood fibers and chemicals, which provides bulk and absorbency. It also contains sodium polyacrylate (also known as polyacrylic acid), a super absorbent powder that can hold 30 times its weight in water per gram. Although it is classified as expected to be toxic, a typical diaper houses 4 to 5 grams of these small, transparent crystals within the center, but it sometimes leaks out of the lining.

Synthetic dyes are used to color diapers, create cartoon designs, or as a wetness indicator. Many diapers are made using Disperse Blue 106, Disperse Blue 124, Disperse Yellow 3, and Disperse Orange 3, all of which have been known to cause contact dermatitis (diaper rash) and an increased sensitivity to allergens.

Though these ingredients and materials ought to be concerning on their own, it is the mixture of chemicals used that can create a truly toxic brew.

The wood pulp core of diapers are bleached with chlorine, a process that contaminates the end-product with dioxins. Dioxins are highly toxic and carcinogenic. Although a 2002 study found that the exposure to dioxins in diapers is too low to pose a serious health risk, would you want to repeatedly (and for years) wrap your baby up in such a substance?

And if that’s not bad enough, disposable diapers actually generate emissions that your baby can breathe in. A study published in 1999 used rats to examine the respiratory effects of repeat exposures to diaper emissions. Not only did the researchers identify more than a dozen chemicals, including toluene, styrene, and trichloroethylene, they observed that repeated exposures are toxic to the respiratory tract and may cause or worsen asthma.

It comes as no surprise that disposable diapers, used daily, multiple times per day, for at least a couple years, produces a lot of landfill waste. According to an EPA report, the number of disposables discarded in 2013 alone was 3.6 million tons, the equivalent of more than 20 billion diapers.

The impact, on an individual level, is still shocking. From birth to the time they are potty trained, a single child will use around 7,000 diapers. That figure translates to more than 2 tons of waste per kid!

Disposable diapers are considered garbage. They cannot be recycled or composted. And we have no idea how long they actually take to decompose since disposable diapers haven’t been in existence long enough for humans to track it. Because landfills bury waste in a “dry tomb” – a dry and airless environment – some estimates peg disposable diapers taking anywhere from 250 to 500 years to degrade.

4. The Chemicals in Disposable Diapers Leach Into the Environment

The accumulated billions (or trillions?) of disposable diapers sitting in landfills all over the country right now are leaching dangerous chemicals into the soil and water.

In addition to the human health concern, dioxins are also persistent organic pollutants (POPs) that accumulate in the human body and have an adverse effect on ecosystems and wildlife. Because POPs are resistant to degradation, they remain in food, soil, water, and air forever.

Another nasty chemical found in the outer lining and adhesive tape of many brands of diapers is tributyltin. A highly toxic biocide, tributyltin is an endocrine disruptor this is extremely harmful to aquatic organisms. Also resistant to degradation, it can persist in the ecosystem for 30 years.

While these are just two of several synthetic substances that are capable of impacting the health of the planet, let us not forget what the diaper itself is filled with: poop. Human feces are considered biowaste with the capacity to transmit pathogens. Excrement dispatched through the toilet is treated and processed to remove contaminants before it is released into the environment but poopy diapers remain untreated. Adding human waste to the microbes already present at the garbage dump increases the risk of viral and bacterial diseases seeping into the groundwater.

5. Disposable Diapers are a Drain on the Earth’s Resources

The constant churning out of disposable diapers poses a major drain on the earth’s resources while propping up dirty industries.

The wood pulp used in diapers is equal to the loss of around 250,000 trees per year. The plastics used to make the outer and inner lining of the diaper is derived from petroleum, a non-renewable fossil fuel. The super absorbent sodium polycrylate crystals are also manufactured from crude oil. From acquiring raw materials, processing plastics, manufacturing the product, and transport, the disposable diaper industry turns out to be a big supporter of oil.

On the flip side, the main criticism levelled against reusable cloth diapers is its water and energy use. A 2005 study comparing disposable and cloth diapers concluded that laundering cloth diapers had the equivalent environmental impact as the raw resource extraction and manufacturing process of disposables. This study had one major flaw: the data used to determine how much water and electricity is expended per load of cloth diapers was based on washing machines and dryers made in 1997. We’ve come a long way since then and laundry machines are certainly far more efficient than they were 20 years ago! You can lessen your environmental footprint even further by always air drying, running only full loads, and keeping the water temperature below 140°F.

Although newborns will require more frequent changings and older babies less, on average kids will need to use around 8 diapers per day before learning how to use a toilet. It takes a child between 2 to 3 years to reliably visit the washroom of their own accord, putting the tally for disposable diapers at 5,840 to 8,760 from cradle to commode. At a cost of $0.30 per diaper, that’s a total of $1752 to $2,628.

Reusable cloth diapers are certainly the healthier choice for your baby, the planet, and your bank account.

Cloth diapers can be washed and reused throughout the entire pre-potty period, eliminating the wastefulness of disposables. Reusables are also free of questionable chemicals and materials. And because you need only purchase cloth diapering systems once, it will pay for itself in no time. Use them again with your next child or donate them to a cloth diaper bank.

There’s a lot of choice in cloth diapering systems – from flats, prefolds, pocket diapers, fitted diapers, to all-in-ones and all-in-twos. You can read up on each type here.

We love Thirsties in particular because they offer several complete diapering systems. The Duo Wrap is a waterproof and breathable 100% polyester diaper cover that is fully adjustable. Pair it with their hemp inserts, hemp prefolds, or fitted diapers which sit between baby and diaper so you can simply wipe down the cover before using it again. Thirsties also carries one-size All-in-Ones and Pocket Diapers too.

To get started, you’ll need between 24 and 36 cloth diapers in rotation. Although switching to cloth will cost around $300 to $500 upfront, that’s a massive savings over the lifetime price of disposables.

Ready to make the switch? You can bone up on how to change a cloth diaper here. And for some invaluable cleaning tips, this article will walk you through how to properly wash cloth diapers.