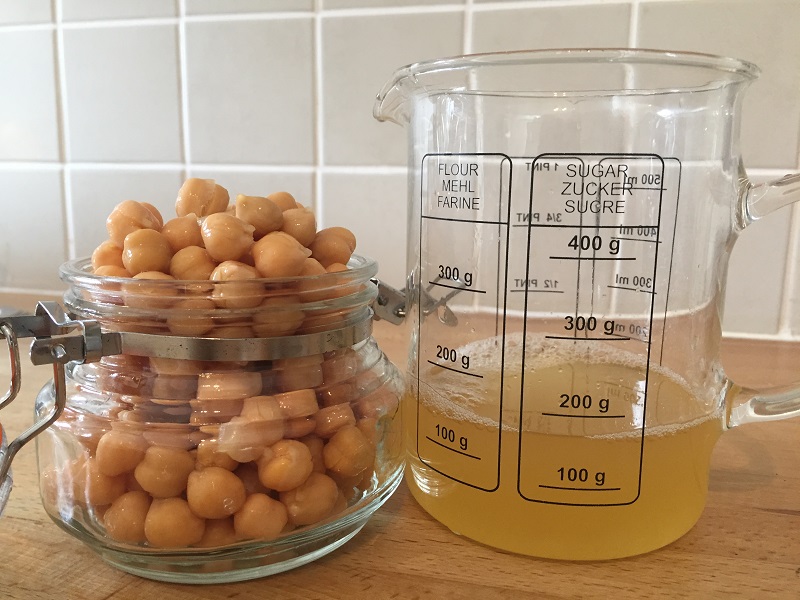 Aquafaba – more commonly known as the liquid you discard from canned chickpeas – has become a prized culinary ingredient thanks to its ability to replace eggs in just about any recipe!

It’s not just a fantastic discovery for vegans or those following a plant-based lifestyle, but also for those who have to forgo all sorts of treats due to an egg intolerance or allergy.

Skipping eggs is also a great way to reduce your intake of saturated fat and dietary cholesterol. Here are 30 recipes you’ll never guess use aquafaba instead of egg!

1. Blueberry Muffins – tasting every bit as good as store-bought muffins, this recipe includes almond meal and yoghurt to increase the protein content. It also uses wholemeal flour, fresh frozen blueberries and minimal coconut sugar for a healthier treat. Unlike many egg-free muffins, these are light, fluffy and crumbly.

2. One-Hour Cinnamon Rolls – this easy breakfast treat can be made in a mere 60 minutes using just one bowl! With maple syrup, coconut oil, coconut sugar and a creamy lemon cashew frosting, these soft and tender rolls are both vegan and soy free.

4. Earl Gray and Lemon Macarons – just like Matcha green tea, Earl gray really stands out in baked goods – and this recipe is no exception. Earl gray leaves add color, texture and flavor to meringue cookies, which are filled with a refreshing lemon buttercream. This recipe is a little challenging, but worth the time and effort!

5. Fluffy Oatmeal Pancakes – aquafaba is the key to the light and fluffy texture of these vegan oatmeal pancakes, which make the perfect weekend breakfast – especially when served with fresh fruit and a drizzle of pure maple syrup. Toast the oats to give them extra depth and flavor, and be sure to whip the chickpea liquid into a foamy meringue to lift and structure the cakes.

6. Allergy-Friendly Cheesecake – love cheesecake but suffer from multiple food allergies or live with someone who does? Traditional cheesecake – loaded with common food allergens like dairy, wheat, eggs and sugar – is probably off the cards. Amazingly, this tasty and creamy cake is made from everyday ingredients, yet is completely free from dairy, eggs, gluten, soy, peanuts and tree nuts! Enjoy!

7. French Toast – most egg-free French toast recipes rely on mashed banana or nut milks. While these are delicious in their own right, they can’t quite masquerade as the traditional eggy toast…unlike this aquafaba version which uses chickpea brine with non-dairy milk, sugar, and vanilla.

9. Healthy Marshmallow Fluff – blend aquafaba with a liquid sweetener of your choice (like honey, maple syrup, xylitol, or stevia) for a healthy, sweet and airy cream that is perfect on top of lattes; in homemade s’mores, cupcakes, and Fluffernutter sandwiches; or eaten straight off the spoon. The possibilities are endless! Add an optional pinch of cream of tartar for stabilization, and some vanilla extract for added flavor.

10. Gluten Free Cinnamon Chickpea Blondies – healthier than your average blondie, these are moist and tender in the center with a crackly crust – yet free from oil, dairy and gluten! Although there is a good amount of sugar in there, they’re also packed with protein, fiber, folate, iron and cinnamon, which helps stabilize blood sugar levels. What’s more, the entire batter comes together in the food processor in less than 5 minutes.

11. Eggless Lemon Meringue Pie – an incredible looking (and tasting!) vegan meringue pie that doesn’t deflate even after days in the fridge. The perfect eggless meringue texture is complemented by a flaky thin homemade crust and a well-set lemon curd.

13. Mousse au Chocolat – a velvety mousse recipe made without eggs, dairy, gelatin, soy, gluten or nuts! Combine chickpea water with sweetener, dairy-free chocolate and a pinch of salt in this delicious dessert that will please chocoholics everywhere.

15. Rice Krispies Treats – be transported back in time to your childhood with one bite of these sweet and sticky squares. You’ll need aquafaba, sugar, cream of tartar, agar-agar flakes, xanthan gum, vanilla extract, Bourbon and puffed rice cereal.

16. Homemade Marshmallows – these soft, moist, light and creamy homemade marshmallows are sure to be a hit with children and adults alike. Great eaten on their own, but even better in a hot cocoa or drizzled with melted chocolate.

Aquafaba isn’t just an incredible egg replacer in sweet recipes, it adds a little something extra to many savory snacks, meals and condiments too!

18. Gluten Free Pizza Crust – if you’re sick of getting cardboard when you order a gluten free pizza base, then this recipe is for you. Not only is it free from gluten, but it’s low fat and 100% vegan. With Italian seasoning, crushed red pepper, apple cider vinegar and pink Himalayan salt, it’s full of flavor even without the toppings!

20. Mauritian Savory Crepes – savory crepes are made light and fluffy thanks to the use of aquafaba, while finely chopped scallions and a smidge of cilantro chutney provide the ultimate Mauritian experience.

21. Easy Chickpeasy Breakfast Burritos – a great ‘make-ahead’ breakfast which can be frozen and re-heated later, these chickpea burritos are packed with protein and can be filled with vegetables. Top with freshly squeezed lime juice, half a creamy avocado, hot sauce and cilantro for a flavor explosion.

22. Vegan Butter – this staple can be whipped up in mere minutes by using aquafaba, coconut oil and cold pressed organic rapeseed oil to give a lovely deep yellow color (failing that, a pinch of turmeric powder should do the trick).

23. Gluten Free Pita Chips – bake up these three-ingredient chips and serve them with some salsa or homemade hummus for an easy mid-day or evening snack.

24. Soy Free, Egg-Free Mayonnaise – another staple that can be veganized with chickpea water, this soy-free vegan mayo is a homemade alternative to the popular store-bought ‘Veganaise’ mayo (the taste is very similar too). Be sure to follow the five-minute recipe exactly as written because even small changes can result in a mayo that doesn’t thicken!

25. Fresh Eggless Pasta – fresh homemade pasta is such a treat, but it’s usually not an option for vegans or those with egg intolerances. However, with just a few minutes of your time and using flour, salt, soy milk, turmeric, oil and aquafaba, this fresh pasta can be enjoyed by all!

27. Hollandaise Sauce – an easy to make egg-free, dairy-free Hollandaise sauce that works well with savory pancakes and breakfast muffins, as a dip for potatoes or vegetables, or drizzled over fish cakes or smoked tofu.

29. Rooibos Tea and Homemade Ice-Cream Float – a grown up sparkling drink with ice-cream on top, this dessert in a glass sees a persimmon and spice aquafaba cream float atop a sparkling Rooibos tea.

30. Egg-Free Cocktails – bartenders everywhere are getting on the bandwagon, and using aquafaba as an ingredient in classic cocktails. Put your newly found appreciation for chickpea liquid to good use in this whiskey Sour, a Sloe Gin Fizz, or a Pisco Sour.