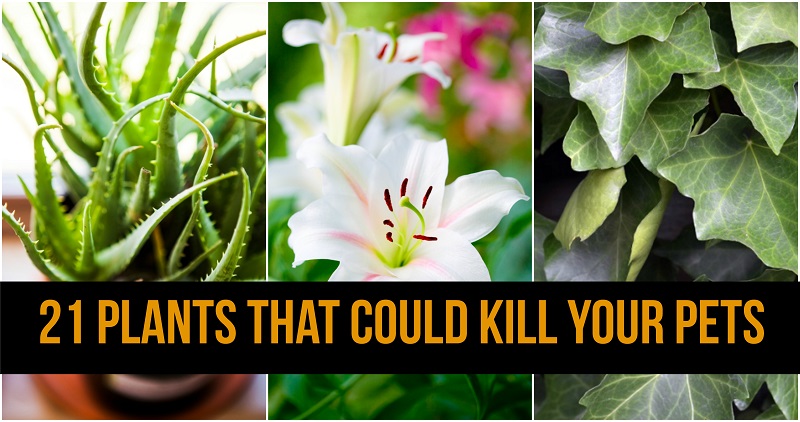 Although the plants in our homes and gardens may seem beautiful, delicate and innocent, some of these can prove to be deadlier than they look – especially when it comes to our furry or feathered friends.

The below list details some of the more commonly grown plants that are toxic to pets, and should be avoided by pet owners. (This list is by no means exhaustive, and the ASPCA provides a full listing here).

If you suspect your pet has been poisoned, seek veterinary treatment immediately as, in many cases, the first few minutes or hours can be critical.

Although an incredibly useful plant to have in the home, it’s important to keep this ‘plant of immortality’ out of reach of curious cats and dogs as it can lead to moderate toxicity.

When ingested, the aloe plant can cause vomiting and diarrhea along with changes in mood and urine color, and rarely, tremors.

These low maintenance plants brighten up any home in the winter with their large, spectacular flowers.

However, they contain several noxious substances which cause harm. Watch out for salivation, vomiting, diarrhea, decreased appetite, pain, lethargy, and tremors in both cats and dogs.

The bulb of the plant is even more toxic than the flowers and stalk so keep your pets away from the potting shed!

While the Spring Crocus can cause general gastrointestinal upset including drooling, vomiting and diarrhea, the Autumn Crocus is far more deadly.

A compound in this plant, called colchicine, is highly toxic and can lead to severe drooling, vomiting, gastrointestinal bleeding, bloody diarrhea, liver and kidney damage, respiratory failure, seizures and death.

Signs may be seen immediately but may also be delayed for several days so if you even suspect your pet has come into contact with any part of this plant, get to a veterinarian immediately.

Toxic to dogs, cats, horses and other animals, ingesting even a few leaves of the azalea can lead to changes in normal muscle and nerve function.

In severe cases, the animal may suffer a drop in blood pressure, coma, and even death.

This delicate little bloom is often found as a filler in flower arrangements, although it can be seen growing in the wild throughout the US, Asia and Europe.

Dogs and cats can suffer gastrointestinal upset, vomiting and diarrhea from this plant, although you should also be aware it can cause swelling and blockage of the air passages.

In the vast majority of cases the pet will make a full recovery within 4 to 24 hours of ingestion.

The sap of the begonia plant contains poisonous crystals which can lead to drooling, difficulty swallowing, diarrhea, and vomiting in animals.

Although this is one of the milder species of toxic flora and typically doesn’t lead to long-term damage, the bulb contains the most concentrated source of poison and so should be stored out of reach of pets.

Also known as Pinks, Wild Carnation or Sweet William, this flower has mild toxic properties which can lead to vomiting, diarrhea and excessive drooling.

Your pet doesn’t even have to eat the carnations to suffer from their toxins – simply allowing the animal’s skin to come into contact with the plant can be enough for dermatitis, an inflamed skin condition, to develop.

This herbaceous annual is definitely not one for pet lovers! It can cause moderate to severe, life-threatening symptoms in dogs and cats, along with cattle, horses, sheep, pigs, fowl and rabbits.

All parts of the plants are toxic, but most dangerous are the seeds/beans. Signs typically develop 12 to 48 hours after eating. Be on the lookout for trouble breathing, loss of appetite, excessive thirst, weakness, trembling, loss of coordination, fever and bloody diarrhea. As symptoms progress, the animal may suffer convulsions, coma and death.

Described as an ‘almost foolproof’ houseplant, the Chinese Evergreen is great for beginner gardeners…but not for their pets.

Dogs, cats and horses are all susceptible to the toxins in this greenery, with symptoms of ingestion including pawing at the face (due to mouth pain), drooling, foaming and vomiting. Your pet may also struggle to breathe or swallow due to swelling of the lips, tongue, and air passages.

An eye-catching and colorful perennial, the chrysanthemum is a traditional garden flower that can pose a hidden threat to pets.

Containing a natural insecticide, the chrysanthemum is generally considered to be low in toxicity to dogs and other mammals (unless large amounts are ingested), although cats can be more sensitive.

Signs of poisoning occur within a couple of hours and include vomiting, diarrhea, hyper-salivation and lack of coordination. Some animals can even experience dermatitis by just coming into contact with these flowers.

These beautiful and innocuous-looking spring flowers are toxic to dogs, cats and horses, although the bulbs are the most poisonous part.

Look out for vomiting, excess saliva and diarrhea. If consumed in large enough quantities, your pet can suffer convulsions, drops in blood pressure, tremors and irregular heartbeat.

Popular because of their incredible height and leaf-span, the easy to care for dieffenbachia is found in homes throughout the country.

However, chewing on the plant can cause it to release toxic crystals into an animal’s tissue, resulting in pawing at the face (due to mouth pain), drooling, foaming and vomiting. Your pet may also struggle to breathe or swallow due to swelling of the lips, tongue, and air passages.

Named by NASA as one of the top plants for purifying the air – and a fantastic plant to encourage sleep – English Ivy is a common houseplant with trailing leaves.

Unfortunately, this useful piece of greenery is also toxic to both kids and pets, with common symptoms in animals including vomiting, abdominal pain, hyper-salivation and diarrhea. Surprisingly, the foliage is more toxic than the berries.

The Golden Pothos boasts beautiful marbled, heart-shaped leaves and is said to purify the air while reducing home allergens.

However, its mildly toxic leaves should be kept away from pets and children with symptoms in animals including intense burning and irritation of the mouth, tongue and lips, excessive drooling, vomiting, and difficulty swallowing.

These perennial plants are prized for their colorful leaves and ease of maintenance.

If eaten, dogs, cats and horses may experience vomiting, diarrhea, and even symptoms of depression.

In areas where these plants grow wild, such as South Africa and Australia, cattle and sheep poisonings are common – so pet-owners should keep them out of the home and garden.

The kalanchoe toxins affect the heart with warning signs including drooling, nausea, vomiting, irregular heartbeat, weakness, tremors, seizures and dilated pupils, all of which can eventually lead to death.

Delicate and stunning, lilies are common as houseplants, or in floral arrangements. Lilies can be fatal for both dogs and cats, although cats are far more susceptible to their poisons.

In particular, watch out for the true lilies (of the Lilium or Hemerocallis species) such as the tiger, day, Asiatic hybrid, Easter, Japanese Show, rubrum, stargazer, red, Western, lily of the valley and wood lilies.

Even eating one or two petals, ingesting the pollen or drinking the water from the vase can be enough to result in severe, acute kidney failure.

Don’t mess around when it comes to lilies – bring your pet to the vet immediately.

Many pet lovers believe that the traditional holiday plant, the poinsettia, is dangerous for both children and animals…but there are far more dangerous flowers out there. While the poinsettia can cause nausea and vomiting if consumed in large amounts, its toxicity pales in comparison to the leaves and berries of both holly and mistletoe.

In particular, mistletoe contains several substances that are a danger to both dogs and cats, and can lead to intestinal upset, severe drop in blood pressure, breathing problems, and even hallucinations (which we interpret as unusual behavior). Seizures and death may follow.

Among the most versatile of shrubs, the oleander plant – from roots to blooms – is toxic to dogs and cats.

Look out for vomiting, drooling, tremors, seizures, diarrhea and loss of appetite. Other signs – which will be picked up by a veterinarian – include an irregular heartbeat and elevated potassium levels.

Sago palms (which aren’t really palms at all) contain a toxin which can cause death in cats and dogs.

The reddish-orange seeds are the most lethal part, although all parts of the plant – both male and female, both young and mature – are poisonous. By some estimations, 50% to 75% of Sago palm poisonings result in the death of the pet.

Vomiting, diarrhea, depression, and lack of appetite are the first symptoms, with liver failure following.

Vomiting, depression, diarrhea, excessive salivation and sometimes difficulty breathing occur in dogs, cats and even horses who ingest enough tulip – although the most toxic part is the bulb.

Severe poisoning usually only occurs when dogs dig up freshly planted bulbs or pets gain access to a bag of them.